This past month, a Shenkar College delegation visited UMass Lowell in the United States on the occasion of the opening of a new fabric research center at the university. The purpose of the visit was to explore possible collaborations between the two institutions in the field of textile and material research. The Shenkar delegation included Mrs. Susan Pernick, President of the American Friends of Shenkar; Prof. Shmuel Kenig, Dean of the Faculty of Engineering; Prof. Hanna Dodiuk, Head of the Department of Polymers & Plastics Engineering; Architect Ayelet Karmon, Managing Director of Shenkar’s CIRTex Center for Innovation and Research in Textiles; Hadas Himelshein, Head of the Textile Design Department; and Dr. Elizabeth Amir, Researcher in the Department of Polymers & Plastics Engineering and at the CIRTex Center. Lowell representatives included Prof. Julie Chang, Vice Chancellor for Research and Innovation; Prof. Joseph Hartman, Dean of the Francis College of Engineering; Prof. Joey Mead, Co-Director at the Nanomanufacturing Center of Excellence and Fabric Discovery Center; and over 25 senior staff members from the departments of plastics, computer sciences, electrical engineering, structural engineering and arts.

The state of Massachusetts contributed $10 million to the building of this new center in Lowell, a city once a historical hub of textile manufacturing that has become home to UMass Lowell. Much like Shenkar in character, this university now teaches some 18,000 students. In recent years, considerable national efforts have been made to restore industry and supporting research in the United States. As part of this endeavor, millions of dollars were invested in textile research facilities at UMass Lowell and in the state as a whole. Shenkar too has been enjoying significant growth in textile research, spearheaded by CIRTex, the David & Barbara Blumenthal Israel Center for Innovation and Research in Textiles. 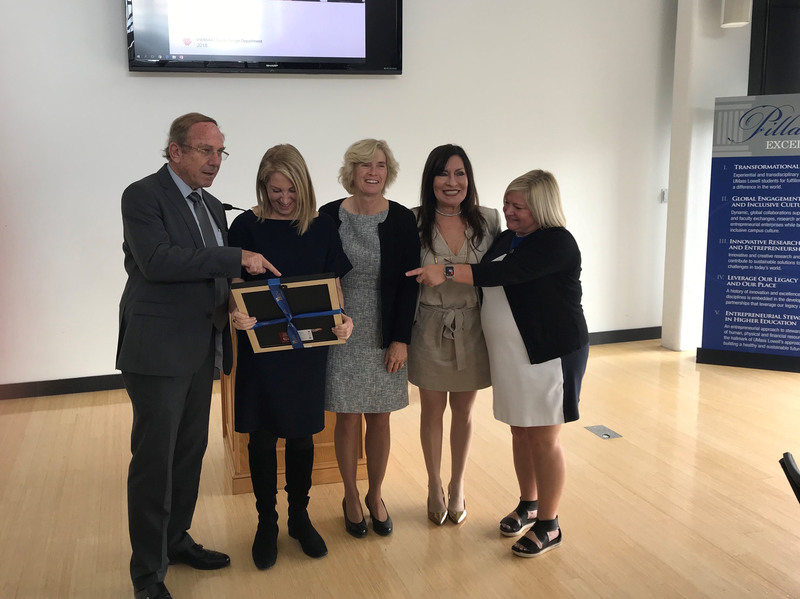 To mark the opening of Lowell’s new center, a conference, The Pernick Workshop on Functional Textiles, was held in memory of David and Bruce Pernick, former heads of the Shenkar Board of Governors and great benefactors of numerous infrastructure projects and research initiatives at Shenkar. The conference began with a ceremony awarding Mrs. Susan Pernick with a certificate of recognition for the many years her family has contributed to both Shenkar and UMass Lowell, particularly in the field of textiles. Prof. Chang then reviewed the fruitful, ongoing relationship between Shenkar and Lowell, citing it as an example of the highest level of academic collaboration. Prof. Kenig greeted the participants, reviewed the many collaborative projects undertaken by Shenkar and Lowell since 2000 with the support of the Pernick Foundation, and described the goal of the conference as “defining topics for future collaboration in smart textiles.”

These speeches were followed by a series of fascinating presentations from representatives of each institution addressing their current research work in the field, which is characterized by a multidisciplinary approach to design and engineering. Shenkar’s Ayelet Karmon introduced the collaboration between engineering and design at CIRTex, Dr. Elizabeth Amir reviewed the research she has been leading in the field of functional fabric treatment and their application in the industry, and Hadas Himelshein gave a presentation about Shenkar’s Textile Design Department, emphasizing projects that integrate design and engineering functionality.

The conference ended with a roundtable brainstorming workshop led by Prof. Joseph Hartman, which produced several promising ideas for areas of collaborative research in the future. Shenkar and Lowell will soon present detailed programs for future collaborations between teachers and students at both institutions. A visit of Lowell representatives to Shenkar is planned for February 2019, with the goal of continuing the fruitful brainstorming that began at Lowell, and recruiting additional support for research promoting the field of textiles in Israel and the world.

Hadass Himmelschein - Head of the Department of Textile Design