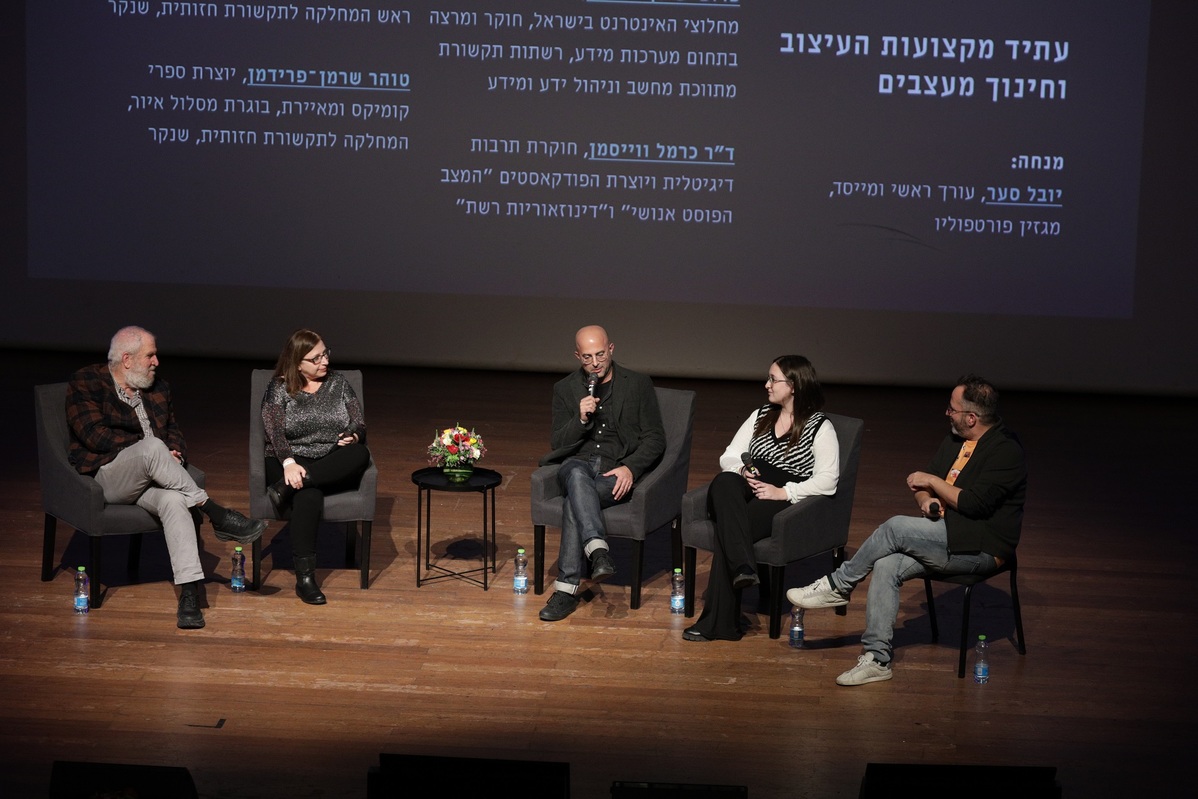 On Wednesday, 7.12.22, the “Creativity in the Age of AI” conference took place at the Tel Aviv Museum, led by Shenkar – Engineering. Design. Art, Portfolio Magazine, and the Tab Tab Tab Collective.

The applications of artificial intelligence (AI) and the place they intersect with creativity was the subject on the table at the first academic conference of its kind in Israel. The conference dealt with the future of the design and art professions through an AI lens and attempted to answer the question: are these tools likely to replace the artist and render human creativity and imagination redundant, or will AI technology become another option in the existing toolbox?

The conference addressed many AI-related topics and examined them from different angles, such as: the artistic series by Yuval Shalev, a graduate of the Department of Visual Communication at Shenkar, which was created with AI software and touched on topics like ugliness and beauty; and Doron Baduach Keren, co-founder and chief design officer of Maapilim and Twentynine Palms brands, who presented new horizons in the field.

There were also in-depth discussions on AI in the panel “The Future of the Design Professions and Designer Education.” Yuval Saar, editor in chief of Portfolio Magazine, moderated the panel, and professor Sheizaf Rafaeli, president of Shenkar; Dr. Carmel Weissman, digital culture researcher; Asaf Hanuka, head of the Department of Visual Communication, and Tohar Sherman-Friedman, a designer and graduate of the Department of Visual Communication, took part in the panel. There was also a joint discussion held by Dr. Yoad Kenett, a senior lecturer in the Faculty of Industrial Engineering in the Technion, and Ofir Liberman, head of digital products specialization at Shenkar.

Other guests and speakers who took part in the conference included professor Yael Moriah, dean of the Azrieli Faculty of Design at Shenkar, Zvi Yemini, chairman of the executive committee of Shenkar, Dr. Tehilla Shwartz Altshuler, head of the Democracy in the Information Age Program at the Israel Democracy Institute, Dror Globerman, journalist and presenter, Merav Shaham, designer, artist and lecturer at Shenkar, Ben Benhorin, artist, designer and lecturer in the Department of Visual Communication at Shenkar, Oren Eliav, artist, lecturer at the Multidisciplinary Art School in Shenkar, Maya Vinitsky, curator of the Department of Design and Architecture at the Tel Aviv Museum of Art, Gili Golander, co-founder and VP of marketing, Bazaart, Gil Perry, CEO and co-founder of D-ID, Yair Adato, CEO and founder, Bria, Matty Mariansky, artist and entrepreneur in the field of artificial intelligence, founder of the community “The Rise of the Machines” and Rotem Kadish, a fourth-year student in the Department of Visual Communication at Shenkar.

The full gallery from the conference >>

At the top of the page (from right to left): Yuval Saar, Tohar Sherman-Friedman, Asaf Hanuka, Dr. Carmel Weissman, and professor Sheizaf Rafaeli at the panel “The Future of the Design Professions and Designer Education” (Photo: Ahikam Ben Yosef)